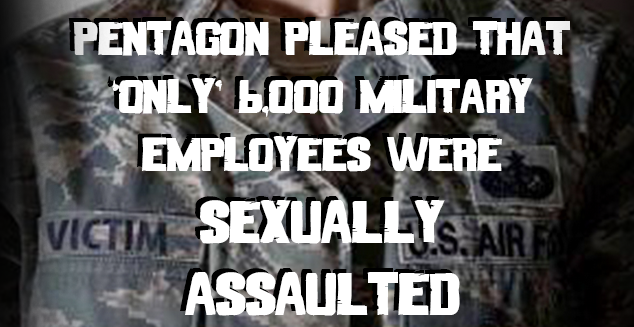 Fact: 62% of military sexual assault victims report that they suffered both personal & professional retaliation after they reported the crime to their Chain of Command. (Department of Defense, 2014)

The retaliation is what makes PTSD so debilitating and if witnessed by others will prevent them from coming forward. It also is the precipitator for other violent crimes like physical assault, domestic violence, murder, and non-combat death. In some cases, the retaliation can push a service member to go AWOL or commit suicide because they feel like they have no way out. Most fear the negative repercussions from their Chain of Command will ultimately end their military careers.

Senator Claire McCaskill assures us that retaliation is now a crime. Why aren’t we hearing about more cases against Commanders and other leaders in the Chain of Command? Who do servicemembers report to if they have been retaliated against? Do you give them expedited transfers too? We have yet to hear about a retaliation case and look forward to the day that we know it has been implemented effectively.

Why are we still not tracking military sex offenders so we can prosecute & prevent more crimes? As a matter of fact, we are unleashing unregistered convicted sex offenders into our communities. The military does not even track those that have been found guilty. We need a national database that connects to the civilian law enforcement databases so we can track them from the time of report. We need 100% participation from all bases world-wide.

Nothing has changed despite the claim from the Department of Defense that reporting has gone up and the overall number of assaults has gone down from 26,300 to 19,000. This does not mean servicemembers trust the military justice system when the majority of them are filing confidential, restricted reports. You must report the sexual assault to your Commander (your boss). The military only investigates & prosecutes unrestricted reports of sexual assault & rape. Just this month the DoD reports they convicted a mere 3.8% of the accused. Service members are not going to report unrestricted if they fear the offender will not be held accountable and retaliation from the Chain of Command.

Pentagon Says Uncovering the Truth about Military Sexual Violence Is Too Burdensome. Huh?

One thought on “If Military Sexual Assault Victims Experience Retaliation, the Military Justice System is Broken”